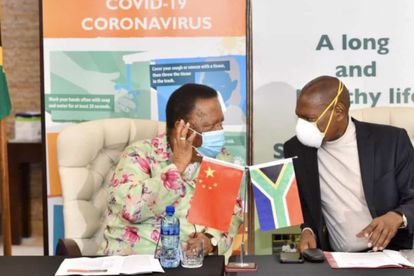 Mkhize, during a press briefing with Minister of International Relations and Cooperation Naledi Pandor and Deputy Minister of Health Joe Phaahla on Tuesday 14 April, said the PPE received thus far and the batches that are currently on order, come to an estimated R800 million.

“We are delighted to witness some proof of our friendly relationship with the people and government of China. We are here to receive the consignment of PPEs. It is highly needed,” said Mkhize.

Mkhize said the following PPE had arrived from China on Monday evening:

“There have been no hitches with the consignments from China, whether it be donations or purchases through the Solidarity Fund,” said Mkhize.

“On what is on order, we are close to R800 million in what will be delivered in the next couple of weeks,” he added.

Mkhize explained that the consignment we currently have and what we will receive in coming weeks is enough stock for six to eight weeks.

“We will have adequate stocks for our health workers. For the next six to eight weeks, we will be in a good position for protective gear,” said Mkhize.

No tensions between South Africa and China

Pandor, after expressing gratitude to China for their help in curbing the spread of the virus, said there are no tensions between South Africa and China — hence the ongoing help in PPE.

This comes after reports of alleged ill-treatment of Africa nationals in China, including the forceful testing, quarantine and other inhuman treatment.

Dirko said: “Reports of these alleged actions are inconsistent with the excellent relations that exist between China and Africa, dating back to China’s support during the decolonisation struggle in Africa, and now manifesting in an extensive Africa-China partnership. This collaborative, mutual relationship also finds concrete expression in the support that China is providing to Africa in the ongoing fight against the pandemic.”

“We also welcome the assurance by the Chinese authorities that it is not the policy of China to discriminate against African nationals,” it added.

Pandor, on Tuesday again, reassured South Africans that we are in good standing with China.

Besides receiving PPE from China, Pandor said the repatriation process from other countries is still ongoing. Flights are expected to arrive on Tuesday night, as well as on Wednesday. Pandor said South Africans that were in Brussels would be brought home.