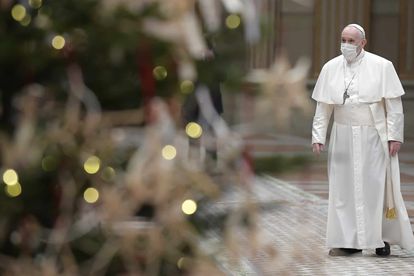 This handout photo taken on 25 December 2020 and released by the Vatican press office, the Vatican Media, shows Pope Francis arriving in the Vatican Blessing hall with a face mask prior to delivering his live-streamed Urbi et Orbi blessing. Photo: AFP/VATICAN MEDIA

This handout photo taken on 25 December 2020 and released by the Vatican press office, the Vatican Media, shows Pope Francis arriving in the Vatican Blessing hall with a face mask prior to delivering his live-streamed Urbi et Orbi blessing. Photo: AFP/VATICAN MEDIA

Pope Francis in his Christmas message called for COVID-19 “vaccines for all, especially the most vulnerable and most in need in all regions of the planet” for the coronavirus; which he said had exacerbated existing global crises.

The pontiff also touched on the plight of children caught up by war. He singled out victims in Syria, Yemen and Iraq in his Christmas message.

COVID-19 vaccines in the Christmas stocking

Vaccines were “glimmers of hope in this period of darkness and uncertainty,” Francis said in the annual “Urbi et Orbi” speech “to the city and the world”.

“I call on everyone, on leaders of states, on businesses, on international organisations, to promote cooperation and not competition, to find a solution for everyone. Vaccines for all, especially the most vulnerable and most in need in all regions of the planet.”

The pandemic had come at a “moment in history; marked by the ecological crisis and grave economic and social imbalances”. He said that made it is “all the more important for us to acknowledge one another as brothers and sisters”.

And “on this day […] let us turn our gaze to the many, all too many, children worldwide, especially in Syria, Iraq and Yemen, who still pay the high price of war,” he added.

“May their faces touch the consciences of all men and women of good will, so that the causes of conflicts can be addressed and courageous efforts can be made to build a future of peace,” he said.

Pope Francis will make a historic visit to Iraq in March, the Vatican said Monday. It’s the first-ever by a pontiff. The trip will include a trip to the city of Mosul, a former jihadist stronghold.

The pope has long spoken of his desire to visit the Middle Eastern country; where two decades of conflict have taken a heavy toll on Christian communities.

The Argentinian-born pope called for peace and reconciliation in Libya and Iraq, “particularly to the Yazidis, sorely tried by these last years of war.”

Earlier this month, the Democratic Alliance (DA) called on the government to release its COVID-19 vaccine plans publicly. The party said “countless of countries are scrambling to acquire the vaccine, except one – South Africa”.

“Securing the vaccine for South Africa as soon as possible should be the government’s number one priority right now. However, South Africa has missed the deadline for a deposit on the CoVax Vaccine Facility, not once, but twice”.

DA leader John Steenhuisen said he will be requesting that Parliament’s Ethics Committee investigate the apparent mistruths put forth by President Ramaphosa and minister Tito Mboweni.