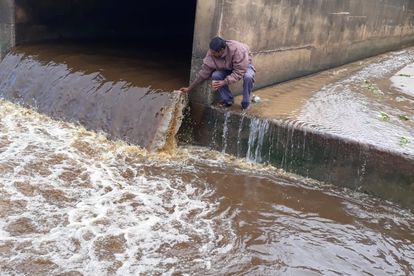 Durban fishermen have raised the alarm over a high volume of pollution that is washing into the sea at Cuttings Beach south of the city at the weekend.

South Durban Community Environmental Alliance spokesperson Desmond D’Sa said fishermen had on Friday reported what appeared to be untreated effluent that was flowing into the ocean from a local canal. He said reports of untreated effluent washing out at Cuttings Beach were also regularly made by local fisherman.

“This is untreated hazardous waste and it has been pouring out (into the ocean) from yesterday,” D’ Sa said of the latest pollution report.

Watch the effluent washing out onto the beach here:

D’Sa alleged that there were problems with some of the city’s waterworks in the South Durban basin that had also led to untreated effluent washing into the ocean at Cuttings Beach.

“The Southern works has been mismanaged. We don’t know how experienced the guys are who are operating the plant. Sewage is being dumped on Cuttings Beach. Merebank is a sacrificial area not only for the sewage but also for the chemicals. The municipal officials have told us that they cannot stop it,” D’ Sa said.

“We want them to stop it and they must fix the sewage plant and the responsible businesses must fix the problem of the untreated effluent,” D’ Sa said.

D’Sa said he had alerted the eThekwini Municipality and the Department of Economic Development and Environmental Affairs as well as the Green Scorpions to the scene of the pollution. He said a team of environmental health specialists from the government agencies was expected to visit the site of the pollution on Saturday.

Cuttings Beach has also featured in the news headlines in recent months for plastic pollution. In January Ward 68 councillor, Aubrey Snyman told the Southlands Sun that the pollution at Cuttings Beach had been an ongoing problem for years. Thousands of plastic bottles that had washed onto the beach left residents horrified at the filthy state of the area.