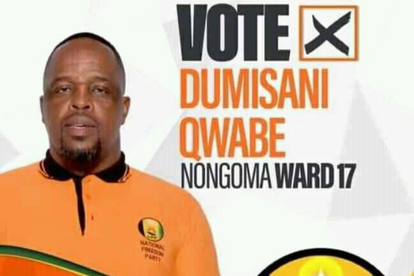 The National Freedom Party (NFP) has sadly confirmed Dumisani Qwabe as the newest politician to be shot dead in Nongoma on Tuesday morning.

According to the ghastly report, Qwabe was gunned down before his killers put him in his car to set it on fire. The late politician was discovered lifeless in the flaming vehicle.

With bullet holes and blood reportedly found around the car, it is presumed Qwabe was attacked while he was still in the vehicle before he was shot dead and the automobile was set ablaze.

Mdletshe believes that the ward counsellor’s savage killing could have easily been avoided if an important plea did not fall on deaf ears. Instead, another politician was shot dead.

“We had previously called for the deployment of soldiers and that SAPS intelligence is intensified in some parts of KZN known to be hotspots and we reiterate that call once more.”

Unsurprisingly, the area’s surviving candidates have been left wondering about the future of their immediate political careers in Nongoma.

“As things stand, our candidates in Nongoma are in fear. They are scared to continue with campaigns,” said Mdletshe.

Police have since revealed finding a body that is likely to be Qwabe’s – pending a DNA test.

“It is alleged that on Monday at 9.55pm Magudu police received a report of a motor vehicle that caught on fire on the R66 between Pongola and Nongoma. On arrival they discovered a man inside the vehicle. The vehicle and the deceased were burnt beyond recognition and the identity of the body could not be confirmed. DNA tests will be conducted to determine the identity of the victim. The cause of the vehicle catching alight will be investigated,” Police spokesperson Col Thembeka Mbele said.