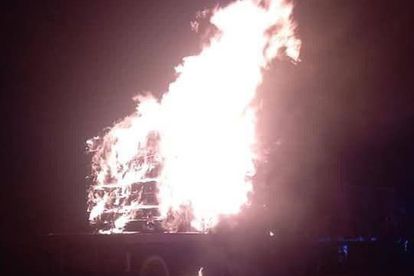 This after a truck was torched by the protesters.

According to the police, the protest action started yesterday, 19 July 2022 by Nomakanjane residents, and continues…

“This evening, a manganese truck became the latest statistic where it was burned in Addo Road,” police spokesperson Col Priscilla Naidu said.

“Police advise truck drivers to use alternate routes and avoid the Addo Road.
Police recommend trucks coming from or going to Addo to use the turnoff at the Monument crossing towards the Coega Hotel and then join Neptune Road which will then take them towards the harbour,” Naidu suggested.

She said the problematic areas, are the corners of Addo and the M17 up to the cemetery.

She added that Public Order Policing will be closing off the road including Ngedle Street until the situation stabilises.

“Truck drivers are warned to be vigilant and travel with caution,”

ANOTHER AREA OF CONCERN BY THE COPS

Another area closely monitored by the police is Tembisa in Gauteng. The community turned the East Rand township upside down after a shutdown earlier.

The residents took their service delivery frustrations to the street and blockaded roads with burning tyres and debris.

A march was organised by the Tembisa Community Forum and other stakeholders, including the Tembisa Neighbourhood Watch who planned to take their grievances to the Ekurhuleni Municipality in writing.

According to the Tembisa Community Forum, Mayor Campbell addressed Tembisa residents today at Germiston offices regarding the protected march to the Ekurhuleni Municipality.

The main issues raised were the exorbitance of electricity rates and water cuts.