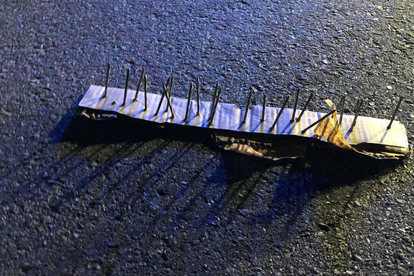 Gauteng police are pleading with motorists to be extra vigilant. Three armed spikers shot at a family that was busy changing a spiked tyre, before the driver drew out a gun to murder one of the suspects in Pretoria’s Akasia on Friday night 17 September.

DRIVER AND HIS WIFE STEPPED OUT TO REPAIR THE SPIKED TYRE

The family was driving on the R80 Pretoria highway when a spike trap on the road brought their vehicle to a halt. The driver, assisted by his wife, dangerously stepped out of the car to repair the punctured wheel. Suddenly, three suspects appeared to attack them with gunshots.

Pretoria police confirmed: “Police warn motorists to be extra careful and vigilant after three armed men attacked the family whose car had stopped after they got a puncture at about 21h00 on Friday, 17 September 2021. It is reported that victims were driving on the R80 highway in Akasia when they hit what they suspected to be spikes placed on the road and the tyre went flat,” the South African Police Service (SAPS) statement said.

“It is alleged that as the driver was changing a wheel with the wife standing on the side, they were attacked by three armed men who fired shots at them.”

According to the added police statement, the driver, who is the husband of the family victims, took out a gun to fire back at the suspects. He managed to shoot one of the suspects dead, while the other two managed to find a getaway on foot.

“The husband shot back and one suspect was hit on the upper body while the other two fled on foot,” the Pretoria police said.

Police later made their way to the scene to discover a replica gun and the dead suspect.

“Members of Flying Squad who were part of Operation O Kae Molao conducted in Akasia and Garankuwa responded promptly and a replica firearm was recovered at the scene, next to the shot suspect who was later certified dead by paramedics,” the statement added.

“Police have launched a manhunt for the suspects who escaped from the scene and are warning motorists driving on R80 highway to be cautious, especially when driving at night,” the brief concluded.