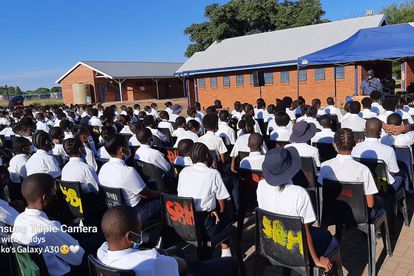 Police recently visited schools in the Northern Cape to raise awareness about issues including drugs, bullying, violence and sexual offences.

THESE ARE ISSUES THE YOUTH FACE DAILY

SCHOOL SAFETY A PRIORITY FOR POLICE

Prins said school safety is a priority for police.

“The theme, “Spend your time wisely as it is a valuable asset,” was the message conveyed.

“A tertiary crime prevention approach was followed and a self-confessed repented Pastor who testified delivered a strong testimony,” police said.

After devotion, learners joined the Pastor in prayer.

ALSO READ: Living in Upington? Are you unemployed? Then this is for YOU

The school principals of both schools thanked the South African Police Service for ensuring the learners’ moral fibre preservation.

WHY IS SCHOOL-BASED CRIME PREVENTION VITAL?

School-based crime prevention is intended to enrich the participation of police officers in promoting safe and orderly school environments.

School safety is often a critical obstacle to learning. Crime, violence and abuse affect all aspects of our community, and schools are not always free from
fear, intimidation or victimisation.

The Department of Basic Education, in partnership with the police is committed to preventing, managing and responding to incidents of crime and violence in schools.

Prevention and early intervention are the most reliable and cost-effective ways to support schools to consistently deliver teaching and learning in a physically and socially safe environment.