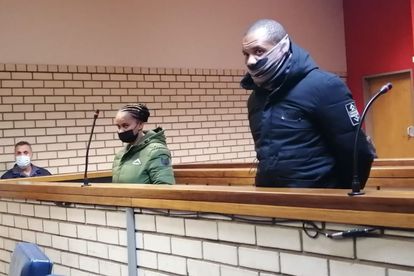 The two are facing charges of two counts of extortion.

THE ACCUSED BLACKMAILED THE COMPLAINANT

It is alleged that on 11 April 2022 the police official and imposter met with the complainant and introduced themselves as police.

According to the National Prosecuting Authority Pretoria regional spokesperson, Lumka Mahanjane, during their meeting, they blackmailed him into giving them R10 000 in order for them not to reopen a case that was previously withdrawn against him.

“On 3 May 2022, the complainant reported the matter to the SAPS Anti-Corruption Unit after realising that Raquel was attempting to blackmail him again,”

She said the police official and imposter were arrested on different dates after an entrapment was conducted by the SAPS Anti-Corruption Unit.

POLICE OFFICIAL AND IMPOSTER ARE A FLIGHT RISK

In court, the accused pleaded not guilty to the charges against them. However, the prosecutor Nkhangweleni Phanuel Mudavhi successfully opposed bail.

Magistrate Ashwin Ramnarain agreed that the state has a strong case against the accused.

Mahanjane said he also agreed that the two are indeed a flight risk and can evade trial since they fled the scene during the trap.

Moreover, Raquel was likely to interfere with the investigations of the case and intimidate witnesses because of her position as a member of Crime Intelligence.

The matter was postponed to 8 July 2022, for further investigations.

The Minister of Transport Fikile Mbalula has welcomed the 12-year prison sentence imposed on a former employee at the Passenger Rail Agency of South Africa (PRASA).

The Scottburgh Regional Court in KwaZulu-Natal found Sphiwe Mngadi guilty of cable theft, more than four years after he was caught in possession of copper cables worth R1 million. The court also found Mngadi guilty of tampering/destroying of essential infrastructure in the Mkhomazi area.

PRASA says though the sentence is below the prescribed minimum sentence of 15 years’ imprisonment, it does send a strong message to some of our rogue employees who think they can continue stealing critical rail infrastructure unabated with no consequences.

“We welcome the NPA’s commitment to put more focus on copper cable theft given the critical role that passenger rail plays in our economy. Only a partnership between our law enforcement agencies will we be able to fight cable theft,”

the agency said of the sentence.

‘He was taking the pic’: SA on the ‘Sarafina!’ reunion without Somizi