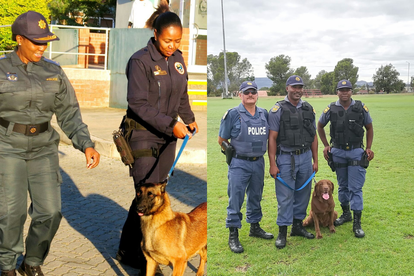 The police were assisted by the K9 unit in making the bust. Image: SAPS

The police were assisted by the K9 unit in making the bust. Image: SAPS

Canines might be man’s best friend but five individuals managed to find themselves on the wrong side of the Hartswater K9 unit. The South African Police Service has confirmed that they were assisted by their furry colleagues in arresting five suspects for drug dealing.
In a statement issued by law enforcement, Captain Olebogeng Tawana commented that the suspects were taken into custody.

Tawana further confirmed that information given to authorities had led them to the house in question.

“Members of Hartswater K9 unit, Crime Intelligence and Pampierstad Visible Police acted on drug dealing information which directed them to a house in Sakhile village, Pampierstad.”

Nigerian nationals among those arrested

Furthermore, the police Captian commented that three of the suspects were Nigerian nationals, while the other two were locals.

“A search and seizure was conducted at the premises hence the arrest of five the suspects. Three of the suspects are Nigerian nationals and two are South African nationals.”

Tawana further confirmed that crystal meth with an estimated value of over R25000 was seized during the raid.

“The suspects were found in possession of crystal meth with an estimated street value of more than R25000 including money believed to be the proceeds of drug dealing. The arrest of the suspects is the result of continuous Festive Season Operation, to address illicit drug dealing and to combat criminal activities.”

In conclusion, the successful operation earned the team praise from the local Station Commander.

“The Station Commander of Pampierstad police, Lieutenant Colonel Gabanakgosi Morebodi applauded members for acting promptly on intelligence, which resulted in the arrest of the suspects.”