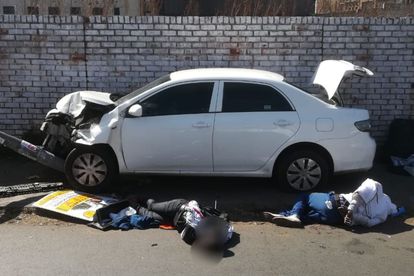 Armed robbers involved in an alleged business robbery in Bloemfontein were arrested by Gauteng police on Saturday. Photo: SAPS.

Armed robbers involved in an alleged business robbery in Bloemfontein were arrested by Gauteng police on Saturday. Photo: SAPS.

Two alleged armed robbers were arrested by Gauteng police on Saturday, 6 August, after a car chase and shootout. The suspects were reportedly involved in a business robbery in Bloemfontein, Free State earlier on the same day.

“The SAPS members reportedly obtained information of a business robbery that took place in Bloemfontein and that the suspects were travelling in a stolen white vehicle towards Gauteng, the members remained on high alert,” said the police spokesperson.

Members spotted the Gauteng-bound vehicle and a high-speed car chase ensued. The suspects allegedly opened fire on the police and they shot back.

The duo was arrested after they crashed the stolen vehicle into another car. A third suspect remains at large after managing to dodge the cops and fleeing the scene.

The suspects are expected to face charges of attempted murder, possession of a stolen vehicle, possession of unlicensed firearms and ammunition and possession of presumed stolen property. The police’s investigation continues.

In an unrelated matter, in Limpopo, the body of a missing man was retrieved from the Mogalakwena River on Monday, 8 August. The 21-year-old was reported missing by his family on 16 July 2022. An inquest docket is under investigation.