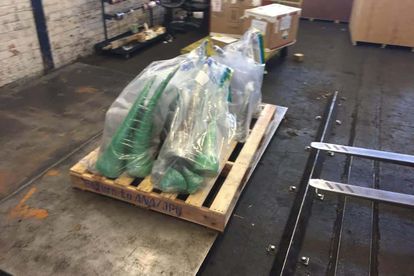 The suspects who were caught attempting to smuggle R23-million worth of rhino horn have been arrested and are currently being questioned by investigators, Eyewitness News revealed on Friday.

R23-million worth of rhino horn found in at O.R Tambo cargo section

The presence of rhino horn in a shipment that was destined for Dubai was detected by the police’s K-9 unit at O.R Tambo International Airport.

The police have revealed that their primary focus is to ascertain how the shipment, which was filled with carpets and plywood, made its way to the warehouse.

According to the South African Tourism Services Association (SATSA), as of 2014, O.R Tambo’s air freight services sees an average of 390 000 tons of air cargo.

With this many shipments comes the responsibility of the cargo section to ensure all security measures are met and in this case, the police want to pinpoint how the rhino horn went through all processes undetected.

Police clamp down on arrested suspects for information

According to the police, the rhino horn was found hidden under the laminated wood pieces of the consignment. Beneath the flooring, the K-9 unit stumbled upon over 30 pieces of rhino horn that was wrapped in plastic.

Furthermore, spokesperson, Katlego Mogale, stated that the investigation should lead them to where the arrested suspects got the rhino horn, a critical part of the ongoing fight against poaching in South Africa.

“We’re trying as the multi-disciplinary team at OR Tambo to try and do our part in relation to rhino poaching. The suspects will be interrogated and further investigation might reveal as to who and where do these people get their rhino horns from.” Mogale stated.