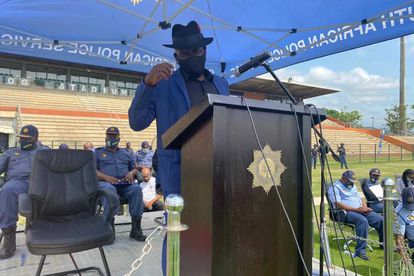 The South African Police Service (SAPS) has established a team that will focus its investigation work on the violence that has hit the Tshwane area, leading up to the local government elections.

This comes after the Police Ministry led two community engagements in a form of street izimbizo in Mamelodi and Mabopane.  The Tshwane region has been identified as a hotspot for potential attacks and threats linked to political violence, as the country edges towards the 1 November local government elections.

During the street imbizo, community members had the opportunity to raise their concerns about local policing with Police Minister General Bheki Cele, Deputy Minister Cassel Mathale, Gauteng Community Safety and Liaison MEC,Faith Mazibuko and the SAPS management team from both the province and national departments.

The increase in contact and gender based violence related crimes were raised sharply by many of the residents, while some people also spoke out about their security concerns following the murder of a ward councillor in Mabopane.

“There are people who want to be councillors, not on behalf of the people in the community but on behalf of criminal syndicates so that the thugs they serve can continue to terrorise and extort businesses in the area, there are also politicians who are trying to have their preferred candidates contest elections and believe using violence and intimidation tactics is going to work, it won’t. We are going hard on this phenomenon, the SAPS and the detective team that has been appointed will ensure that everyone who is involved in these crimes is dealt with accordingly,” Cele said.

Residents called on the police to bring services closer to them. A mobile police station in the Kopanong area has now been opened following the Imbizo. This station will service the growing informal settlement along with the existing police station in Mamelodi East.

In addition, Tactical Response Teams (TRT) teams have also been deployed as force multipliers in both Mamelodi, Mabopane and surrounding areas.