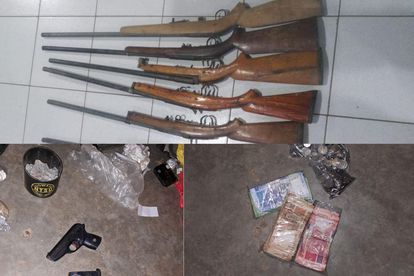 Three people have been arrested in a police operation in Lusikisiki policing district for possession of unlicensed firearms and drugs.

“Three suspects between 27 and 65 years were arrested in possession of unlicensed firearms. A total of six Shotguns were confiscated,”

All arrested suspects will appear before Lusikisiki Magistrate Court on Monday 6 June 2022.

Meanwhile, members of the stabilisation team in Motlhabeng village outside Mahikeng arrested a suspect in possession of an unlicensed firearm, ammunition and drugs.

“Although nothing illegal was found during the search, the driver led the police to a certain house where he alleged there were suspected drug dealing activities.

“On arrival at the identified house, the members found a plastic bag containing white powder suspected to be drugs and a 9mm Vektor pistol with 25 live ammunition hidden and wrapped in a black plastic bag,”

Moreover, the suspect, aged 24, failed to produce a license for the firearm which the serial number was filed off.

Botma said the suspect was then arrested. Police found drugs with an estimated street value of the drugs is R4000.

The suspect is expected to appear before the Molopo Magistrates’ Court in Mmabatho on Monday, 6 June 2022.