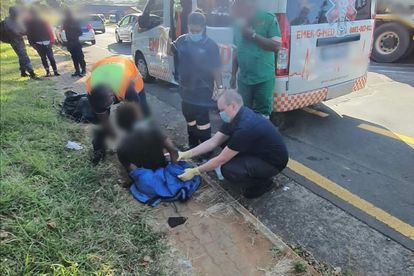 Emer-G-Med Paramedics attended to the suspect at the scene of the shooting. Photo: Emer-G-Paramedics

Emer-G-Med Paramedics attended to the suspect at the scene of the shooting. Photo: Emer-G-Paramedics

An eThekwini Metro Police officer has been hailed as a hero after he came to the aid of a woman and shot an armed robber who had snatched her handbag and was on the run in Amanzimtoti on Tuesday.

eThekwini Metro Police spokesperson, Parboo Sewpersad, said a domestic worker had just left her place of employment at around 3pm when a suspect armed with two knives held her up and robbed her of her handbag. The incident occurred on the corner of Dickens Road and Arbour Road.

“He had snatched her bag and was running away. The metro police officer was in the right location at the right time. He saw the man running and the lady screaming,” Sewpersad said.

“He tried to stop the male who then lunged at him with two knives,” Sewpersad said.

He said the hero officer had pulled out his firearm and shot the suspect on the thigh and the lower leg to deflect the violent attack.

“He was arrested taken and under police guard to a local hospital,” he said.

Sewpersad said that the suspect’s two knives and the woman’s handbag were recovered at the scene of the arrest.

He commended the officer for his swift action that led to the arrest of the suspect.

“We commend the police inspector for taking a quick decision without any hesitation,” Sewpersad said.

Emer-G-Med Paramedics spokesperson Kyle van Reenen said paramedics had been called out to assist at the scene of at the shooting.

“A male suspect sustained a gunshot wound after he allegedly robbed a female pedestrian. The man was treated and stabilized before being taken under police guard to a nearby hospital for further care,” van Reenen said.

Van Reenen said that reports from the incident indicated that the officer had shot the suspect in self defence when the man had attempted to attack him.