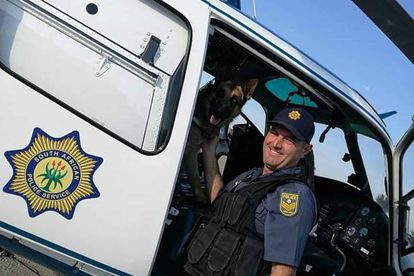 Security officials in Nelson Mandela Bay reported problems with cable theft in the area a fortnight ago and the K9 Unit was activated to handle the complaint.

According to police spokesperson Colonel Priscilla Naidu, cables worth R300 000 had been stolen from Rensburg Street alone in Bethelsdorp.

The SAPS Airwing was also called in to help and they provided a helicopter escort for Max and his handler Sergeant Adriaan Oosthuizen to survey the situation from above.

Police dog to the rescue

Naidu reveals the helicopter carrying Max and his handler came across two men digging a trench, who immediately bolted when they saw the police vehicle.

The chopper landed and offloaded the pair, who immediately apprehended one of the suspects. Max dashed off to stop the other while his Oosthuizen finishing detained the first.

They had both men in custody within minutes of spotting them and have been charged with cable theft. They have not been given a court date yet, but it is expected to be quite soon.

A good year for police dogs

It has been a good year for the brave dogs of the South African police force. In July, Savage, a police dog for the Cape Town Metro Police Unit, was awarded a service medal by the Metro Police.

Along with his handler constable Mosuli Faku, the K9 police officer has been responsible for the confiscation of nearly R160 000 worth of narcotics and cash in just the first six months of this year.

“Officer Savage is an asset to our efforts to curb the illicit drug trade, and we felt it appropriate to award him with a service medal in recognition of his efforts,” said Metro Police Chief Wayne Le Roux at the time.

“Our specialised units perform a very critical function, in particular, our canines. Over the years, drug dealers have become increasingly creative in hiding their wares, but our dogs are up to the task.”