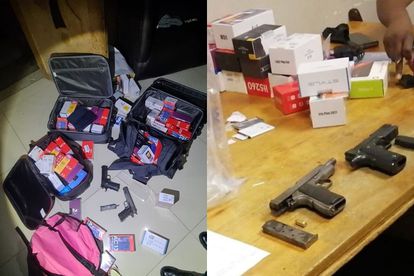 Police have successfully arrested a suspect after a cellphone store robbery. Image: SAPS

Police have successfully arrested a suspect after a cellphone store robbery. Image: SAPS

Police officials have announced the successful arrest of a suspect in connection with a cellphone store robbery. Police spokesperson Colonel Thembeka Mbele confirmed that an operation consisting of teams from multiple departments carried out the operation in KwaZulu-Natal.

In a statement released to confirm the arrest, Mbele revealed that the suspect had been apprehended just moments after the robbery occurred.

The incident in question had taken place on Wednesday afternoon during a traditionally busy time.

“Yesterday afternoon at 17:30 a cellphone store in Estcourt CBD was robbed by three armed men who forced their way into the premises when the employees were locking up.”

Police confirm R250 000 worth of good stolen during heist

Furthermore, Mbele confirmed that a staggering R250 000 worth of stock had been stolen during the armed robbery.

“They held the staff up at gunpoint taking cellphones to the value of R250 000-00 before fleeing the scene. The incident was reported to the Estcourt police. The team received information on the whereabouts of the suspects and proceeded to the Roosboom area in Ladysmith where the suspects were staying.”

After confronting the suspects following the tip off, authorities managed to secure one of the three suspects.

“The suspects spotted the police approaching and two of the three suspects fled on foot whilst the third suspect was arrested on the scene. A 9mm pistol and a gas gun was recovered on the scene with one round of ammunition along with 64 stolen cellphones.”

In conclusion, Mbele confirmed that the suspect will be appearing in court to face a litany of charges.

“The suspect will be appearing in the Ladysmith Magistrate’s Court on 31 December 2021 for charges of robbery, possession of suspected stolen property and unlawful possession of firearms and ammunition.”