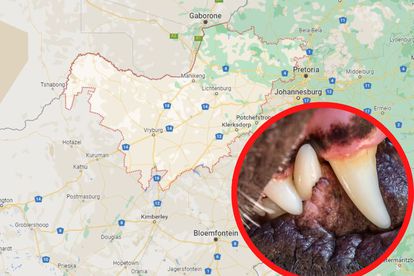 A pitbull mauled a man who was TRESPASSING to death at a tavern early Saturday morning.

POLICE SAID THE PITBULL ATTACKED THE MAN WHEN HE TRESPASSED

According to police spokesperson Lieutenant Colonel Amanda Funani, the tavern owner had closed for the night and unleashed his dogs at the property.

The man, a patron, apparently returned to the tavern and was attacked.

“When the time came to close the tavern, the owner did so. He allegedly alerted the people to leave, closed and left the premises. It is alleged that the owner unleashed his dogs, as he normally does, after closing.”

It was alleged that the Metsileng went back to the tavern, Funani said.

“According to our investigations, yes, the tavern was closed and the victim forces entry by climbing over the fence. Hence we registered an inquest.”

“He climbed over the wall, and a dog attacked him. An ambulance and police were called. The man was certified dead at the scene. We registered an inquest. Police are still investigating.”

She did not have further details at this stage.

TWO DOGS THAT WERE ON THE PREMISES WERE EUTHANISED

The Rustenburg Society for the Prevention of Cruelty to Animals (SPCA)

A spokesperson for NSPCA Special Investigations Unit Nazareth Appalsamy, reportedly said when they arrived at the scene, the owner of the pitbulls surrendered both dogs to the organisation.

Appalsamy reportedly confirmed that two dogs have since been euthanised.

It is believed the attack was caught on camera as the tavern had CCTV installed.

Earlier this week the SPCA wanted the public to realise that, in many instances, the aggressive animals themselves have also been subjected to extreme abuse and cruelty in the manner in which they are kept.

‘AGGRESSIVE ANIMALS HAVE BEEN SUBJECTED TO EXTREME ABUSE AND CRUELTY’

In a statement, the SPCA made it clear that it does not support the petition to ban or outlaw pit bulls.

“But we fully support the motion to develop and implement stronger regulations/legislation with regard to the keeping and breeding of power breed dogs.”SPCA

It said while the SPCA movement’s mandate is the prevention of cruelty to animals and promoting good animal care, the SPCA also values human lives.

“Not only do people suffer from dog attacks, but other animals are also victims and have been mauled to death.

“In many instances, the aggressive animals themselves have also been subjected to extreme abuse and cruelty in the manner in which they are kept, trained, and even killed.”SPCA