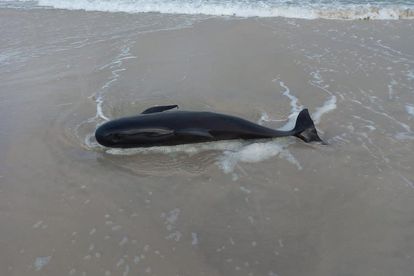 The City of Cape Town said it was informed that the Pilot Whale calf washed up at Table View beach on Thursday morning, 18 August.

The carcass was collected by members of the City’s Coastal Management team and transported to the Paarden Island facility where the national government is expected to perform an autopsy to determine the cause of death.

“Pilot Whales are deep sea animals and we also get them often along our shore. It is not unusual for these animals to get stranded and we will keep on monitoring our coastline in the coming days,” the City’s Mayoral Committee Member for Spatial Planning and Environment, Eddie Andrews.

The Giant Squid washed ashore at Scarborough Beach on Tuesday, 16 August. Iziko Museum Scientists were alerted and took the animal’s measurements and samples for genetic testing.

Andrews said the Giant Squid beaching was not unusual as one of two of the animals wash ashore every year in the same area.

As previously reported, Giant squids are very elusive animals and typically live at ocean depths between 300 to 1000 metres and can grow up to 13 metres for females and 10 metres for males. The first images of a live animal in its natural habitat were captured in 2004 by a Japanese team.