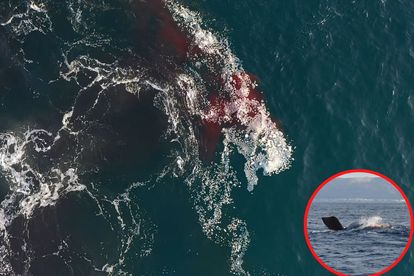 Just look at these incredible photos!

The crew and passengers of local charters watched in awe as a Southern Right Whale gave birth to her calf right in front of their eyes on Tuesday.

THESE INCREDIBLE PHOTOS WERE TAKEN ON TUESDAY

This extraordinary moment happened in the waters of Walker Bay.

According to a Facebook by the Southern Right Charters, they have not seen such a sighting in over two decades.

“Crew and passengers alike – both totally stunned, in awe, possibly even shock and some in tears…… yes, we saw you!

“I still don’t think any of us have actually come to terms with the magnitude of what we witnessed.”

THE WHALE ROLLED UPSIDE DOWN EXPOSING HER UNDERSIDE

The Southern Right Charters said after they spotted a Southern Right Whale, it quickly became apparent to the crew on board that something was off with this whale.

“After a short moment or two, she rolled upside down – exposing her underside & the water around her went red.

“In literally a matter of seconds later, she then pushed out a newborn calf – who, within an equally short few seconds, was on the surface taking his/her first breaths.”

What’s for sure – it’s a moment no one on board will ever forget.

Southern Right Charters is environmentally sensitive and operates under the ethos of ‘Observing NOT Disturbing’.

LOOK AT THESE INCREDIBLE PHOTOS:

The Southern Right Whale (Eubalaena Australis) is best known in South Africa’s Cape. During the southern winter, good numbers arrive there from their sub-Antarctic feeding grounds – to breed in the calm inshore waters.

HERE ARE FIVE FASCINATING FACTS ABOUT THE SOUTHERN RIGHT WHALE