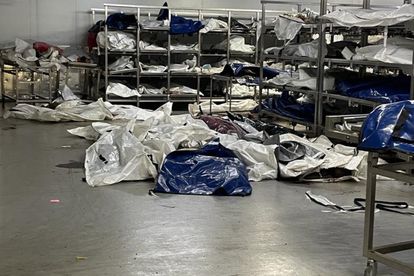 The mortuary has exceeded its capacity, leaving bodies lying around on the floor. PHOTO: Nehawu

The mortuary has exceeded its capacity, leaving bodies lying around on the floor. PHOTO: Nehawu

The Phoenix Forensic Mortuary is now a building filled with the stench of dead bodies lying around, hovering flies and a health hazard for its workers.

The mortuary’s storage capacity is seriously exceeded and strained. Bodies are lying on the floor since there is no storage in the fridges, she said.

“There are still unidentified bodies from last year’s July unrest and this year’s floods.”

FLIES, STENCH AND NO DISINFECTANTS

The fly-catchers in the autopsy room are out of order, meaning there are flies hovering the mortuary.

In addition, the mortuary has no cleaning or disinfectant chemicals, resulting in the mortuary reeking of an unbearable stench.

The mortuary has no blades or needles to cut and stitch up bodies, said Zulu.

“There is no PPE – gloves, gowns, masks – issued to the workers in the past three months. Drains are blocked on the other side of the autopsy room for months now,” she said.

NEHAWU MORTUARY WORKERS ARE BEING TARGETED

Members of the union at the mortuary are working under terrible conditions. The place is now a health hazard, placing the lives of workers at risk, Nehawu said.

“What is also disappointing is that instead of the department [of health] fixing what has been raised above, they are now targeting our shop-stewards, who have been raising these issues. Currently, two of our shop-stewards have been suspended,” said Zulu.

Nehawu has, on numerous occasions, raised this matter with the management of the facility as well as the eThekwini district management.

A meeting was held on 23 June with the management. Last week, the union also met with the Provincial Office Bearers of Nehawu to conduct a fact-finding visit.

“The union has long cautioned the department of health about the implications and shortcomings of the closing of the previous Gale Street Mortuary, and the need to urgently address the issue of staff shortage in mortuaries.”

The union called on the KZN MEC for Health Nomagugu Simelane to make an urgent intervention.

“Otherwise, the union will be left with no option but to explore other avenues as part of defending its members,” said Zulu.