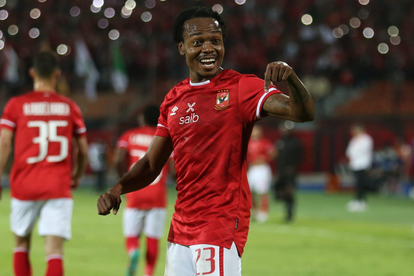 Percy Tau has recovered his form at the business end of the CAF Champions League for Al Ahly. Image: @iDiskiTimes / Twitter

Percy Tau has recovered his form at the business end of the CAF Champions League for Al Ahly. Image: @iDiskiTimes / Twitter

Percy Tau is back to his best – he registered an utterly staggering SIX goal contributions in two matches in the CAF Champions League!

Tau and Pitso Mosimane continue to do the unthinkable.

Both men are on their way to the CAFCL final with incredible records. Mosimane has just reached his third successive final while Tau notched up one of the craziest goal contribution tally’s you’ll see in CAF or any tournament semi-final.

The Lion of Judah racked up an incredible six goal contributions against ES Setif! Numbers like these are truly unthinkable.

Tau scored twice and assisted in all four of Al Ahly’s other goals, according to iDiskiTimes. Meaning, he was involved in all six of their goals during the Egyptian giants 6-2 aggregate victory over Setif.

READ | TOP KAIZER CHIEFS MAN RULED OUT FOR THE REMAINDER OF THE SEASON!

Check out these mind-blowing numbers for yourself:

Indeed he did, dancing his way through the Algerians defense and into the CAFCL final with Mosimane.

Muzi and Jingles continue to wave the South African flag high in Egypt. Putting our name on the map as they soar through one record after another. Tau is on his way to his first-ever CAFCL final while in the form of his life.

What a remarkable return and what a signing from Mosimane!

READ | KAIZER CHIEFS: TEENAGE SENSATION ON THE BRING OF SIGNING FOR LA LIGA SIDE