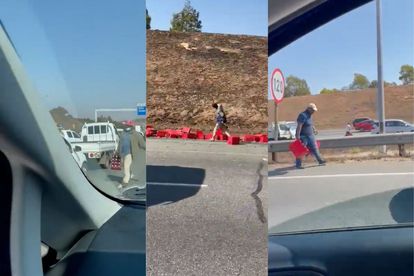 Several people on a Gauteng highway helped themselves to a crate of beer – or two – after a South African Breweries (SAB) truck lost some of its load on Friday, 6 August. The truck was reportedly transporting more than 30 000 litres of beer.

PEDESTRIANS HELP THEMSELVES TO A BEER OR 12

Videos of the incident that reportedly happened on the N12, according to News24, surfaced on social media on Friday morning. In the video clips, traffic is creeping along and what appears to be hundreds of bright red beer crates can be seen strewn on the left side of the highway. Meanwhile, several pedestrians are weaving between traffic and hauling crates of beer away.

Gauteng South African Police Service (SAPS) spokesperson Captain Mavela Masondo told News24 that the left sail of the SAB truck’s trailer loosened and fell onto the busy highway. This resulted in a lot of the truck’s load – 34 000 litres of beer – falling onto the road. The truck was reportedly on the way to Kimberley from the Alrode Depot.

Masondo told the news outlet police managed to disperse the crowd but no arrests were made.