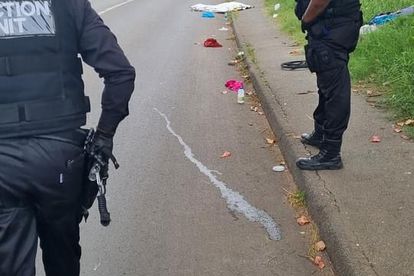 A pedestrian was shot at least eight times in a drive-by shooting in Phoenix on Friday afternoon.

WHAT HAPPENED ON FRIDAY AFTERNOON?

According to Reaction Unit South Africa (RUSA) spokesperson Prem Balram the unidentified man was killed in a drive-by shooting on Northside Drive in Caneside in Phoenix.

“RUSA Members arrived on scene at approximately 13:22. A man was lying on the road bleeding excessively from his injuries. On examination, he was found to be shot at least eight times in the body and head,” Balram said.

He added that the man was declared dead on the scene.

“According to a witness, four occupants of a silver Toyota Corolla opened fire on the pedestrian before they sped off. Several spent 9mm cartridges were recovered,” Balram said.

MOTIVE FOR THE SHOOTING UNKNOWN

The motive for the shooting has not been established.

“A case of murder has been opened for investigation at Phoenix SAPS. It is alleged that today at 13:30, a 30-year-old man was walking when he was shot in a drive-by shooting by four unknown suspects at Caneside in Phoenix. He sustained multiple gunshot wounds to the head and body. He was declared dead at the scene. The motive for the killing is unknown at this stage,” he said.

Meanwhile, also in KwaZulu-Natal, two men who attempted to rob a bread delivery vehicle on New Glasgow Road in Canelands fled empty-handed after they were disturbed.

IN ANOTHER INCIDENT IN KWAZULU-NATAL

“The occupants of the Hyundai K2700 were in the process of delivering bread when two suspects approached them. One suspect produced a firearm and demanded cash. A passerby stopped his vehicle and screamed for assistance when the suspects abandoned the robbery and fled on foot into an informal settlement,” said Balram.

LUCKILY NO ONE WAS INJURED

He said RUSA members arrived on the scene at approximately 11:14 on Friday.

“Reaction Officers conducted an extensive search for the robbers; however no arrests were made. The victims were not injured.”