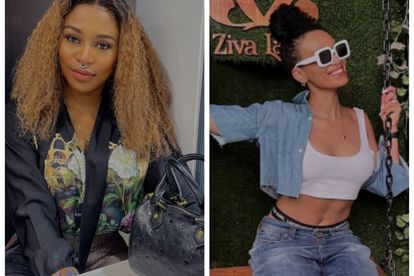 South African actress Pearl Thusi and musician Zinhle “DJ Zinhle” Jiyane have been trending all week after a clip was shared online of Zinhle supposedly “shading” Pearl. Zinhle quickly shot down all the chatter around the video and claimed that it was taken out of context. And now another snap has surfaced on social media, this time it shows the former best friends sharing a cute moment together.

Instead of taking the photo at face value, many South Africans have speculated that the pair are trying hard to prove that they aren’t beefing with each other.

Isono actress Pearl Thusi and hitmaker DJ Zinhle were once upon a time inseparable.

Every week the besties would grace our social media pages with snaps of them living their best lives out on vacation or clubbing together.

All of that stopped very abruptly and left many South Africans wondering why that is.

Soon people started speculating that the pair are beefing – their thoughts were somehow justified after a clip surfaced of Zinhle supposedly snubbing Pearl was shared online.

Both of them subsequently headed online to clear the air about the clip and maintain that they are still as thick as thieves.

In fact, just to make sure people believe them, Murdah Bongz – Zinhle’s man – also shared a snap together having fun.

The photo was reshared on Twitter by popular user Chris Excel who captioned it:

Many locals agreed with his sentiments and had this to say:

“ Impressive that’s definitely her Best Acting to this date”

While @varsilife thinks that the pair are trying to hard and commented: