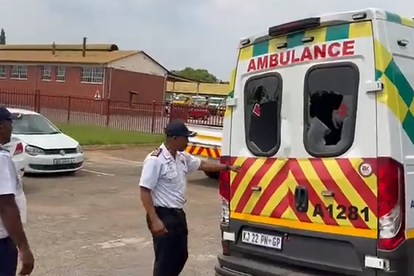 An ambulance was extensively damaged when a patient was allegedly killed in Atteridgeville. Screenshot via video from Gauteng Health.

An ambulance was extensively damaged when a patient was allegedly killed in Atteridgeville. Screenshot via video from Gauteng Health.

Gauteng residents have been urged not to take the law into their own hands and hinder operations of the emergency medical personnel after a patient was allegedly killed during a mob justice incident while inside an ambulance.

The incident happened on Monday, 21 November at Mshongoville informal settlement in Atteridgeville, Tshwane.

Gauteng Emergency Medical Services (EMS) personnel also known as the Green Angels came under attack whilst treating an assaulted patient who was in a critical state.

A call was reportedly made to the Gauteng Emergency Communication Centre at around 19:44. An ambulance was dispatched to the area at 20:00 and a police escort was requested to allow the response team to enter the area safely.

ALSO READ: Learner who allegedly fatally stabbed another to remain behind bars

According to Gauteng Health and Wellness MEC spokesperson, Tshepo Shawa, upon arrival of the EMS personnel, the patient was found already on the ground surrounded by the community. The paramedics were able to initiate treatment and prepared to transport the patient to the nearest hospital.

Shawa said as the ambulance was getting ready to leave the scene community members reacted and started throwing stones and barricaded the road to prevent the ambulance from leaving. They accused the patient of some crime and demanded justice on the spot.

“The Green Angels ran for cover as they were now under attack. Unfortunately, the patient was further fatally assaulted while lying on an ambulance stretcher. The ambulance was also extensively damaged and some medical equipment was stolen. A case has since been opened with the police,” Shawa explained.

“Mob justice or taking the law into our own hands cannot be the answer to address some of the socio-economic issues affecting communities,” she said.

The MEC further said attacks on health personnel have dire consequences as they make it difficult for them to discharge the constitutional mandate to provide access to healthcare services.

“I will further engage the Community Safety Department and community structures to see how we can work together to  strengthen some of the interventions that are already in place to curb such incidents,” she added.

The Gauteng EMS personnel who were attacked reportedly went for medical observation at Kalafong Provincial Tertiary Hospital and will be attending counselling sessions as part of the Employee Health Wellness Programme as well as continuous monitoring of when they return to normal duties.

ALSO READ: ‘He must remain in prison until death’: EFF on Janusz Walus