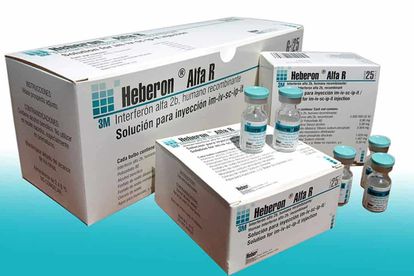 The chair of Parliament’s Portfolio Committee on Defence and Military Veterans (PCDMV) wants top military medical officials to explain the acquisition of the Heberon Covid-19 medication by the SA National Defence Force (SANDF).

The amount of R260,59 million quoted for acquisition of Heberon (the unregistered medical drug Heberon Alfa R, containing the active ingredient interferon alpha 2b) by the Auditor-General is converted from the US price of $15 048 872,50.

This is set out in the Second Special Report on the financial management of government’s COVID-19 initiatives provided by Auditor-General Tsakani Maluleke, defenceweb.com reported.

“We are shocked and accountability is needed.”

The PCDMV statement follows a similar one issued by Democratic Alliance (DA) parliamentarian Kobus Marais in his capacity as shadow defence and military veterans minister.

“We need accountability on how such large consignments could be procured outside the rules and regulations set out to ensure safety, transparency, and good governance and that there was value for money.”

“The PCDMV this week received a special audit report on the financial management of COVID-19 funds by the Department of Defence (DoD) from the Auditor-General, which highlighted shortcomings including non-submission of information resulting in audit limitations, inadequate planning for the procurement without indicating how the department determined the required quantities, lack of evidence of prior approval by Sahpra for the importation, no post-importation testing and breach of cold-chain requirements, which resulted in about 40% of vials’ integrity being possibly compromised.

‘Must investigate to get to the bottom of the matter’

“This, according to the committee, is an indictment of the department’s procurement processes and those responsible must be held accountable for the lapse,” Xaba added.

“The committee further finds it unacceptable the contract used during procurement did not specify the quantity required and was only signed after the first delivery. These discrepancies are why we must investigate to get to the bottom of the matter.”

“The committee concerns are in the context of good governance and prudent spending of taxpayer resources, especially in a department perpetually complaining about inadequate financial resources.”