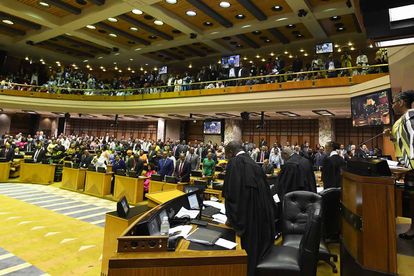 Parliament has lashed out at local newspaper The Citizen, accusing it of fabricating a story, in which it said physical meetings in the national assembly would resume from 6 October 2020.

The article, headlined ‘Parliament to reopen in October’, has since been removed from its website. The report claimed to have received confirmation from the parliamentary communications team, but spokesperson Moloto Mothapo isn’t having it, accusing the publication of making up sources.

“Parliament has noted with concern the Citizen newspaper’s story, which is replete with blatant falsehoods and fictitious references, claiming that Parliament will fully open for physical meetings in Cape Town on 5 October,” he said in a statement.

Parliament: The Citizen ‘inventive with sources and attributions’

Mothapo further questioned some of the supposed factual errors in the story and how they were published without the necessary processes being applied.

“Not only does the newspaper seem to be inventive with sources and attributions, but it also seems unable to distinguish between Parliament and the Cabinet as it uses the two interchangeably. It boggles the mind how such errors could make it through the newspaper’s checks and balances into the public domain”

“As if these fabrications were not bad enough, the story further claims that ‘regular Cabinet programme will resume on 6 October,’ cringeworthily attributing this to what it calls ‘parliament’s communications department,’” Mothapo further added.

Since the start of the nationwide lockdown back in March, parliamentary proceedings have largely been held virtually. In other proceedings, including when President Cyril Ramaphosa or Deputy President David Mabuza update the nation, there has been a limited number of MPs present.

However, Parliament is not taking the matter lying down and intends approaching the Press Ombudsman for its intervention. Mothapo goes on to clarify that parliamentary proceedings have been ongoing since as early as April and said the paper hadn’t even sought to contact or interview them for the story.

“At no point has the newspaper made an attempt to contact or interview Parliament for its story,” Mothapo said.

“Parliament will be writing to the Press Ombudsman to seek redress for this unbecoming conduct. For the record, Parliament has been open for business (even under the lockdown regulations) since April”

“MPs have been working both from the precinct and remotely, through what is called the hybrid system, in order to conform to the current Covid-19 regulations that prescribe the number of people that can gather in one place to perform various duties. No decision has been taken regarding any change to this status quo.”