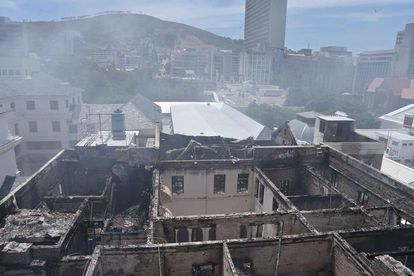 As The South African reported on Sunday, South Africa’s national parliament was on fire. The blaze caused the roof of one building to collapse while also destroying the chamber of the National Assembly.

Accoring to the reports, the disaster started in the third-floor offices before firefighters finally managed to bring the blaze to halt. But it was a little too late to prevent some serious damage.

Here are some pictures that tell the destruction after the parliament fire.

The fire at Parliament has been described as ‘appalling’, ‘devastating’ and even as ‘arson’. However, Economic Freedom Fighter heavyweight Mbuyiseni Ndlozi has a completely different, and perhaps even controversial, description for the blaze.

Ndlozi took to social media on Sunday evening, while emergency services continued to battle against the blaze, to dub the fire as nothing less than ‘beautiful’. Full story here.

With every unnatural major destruction such as this, someone has to take responsibility somehow. Meanwhile, a 49-year-old man has been arrested on suspicions of having a hand in the parliament fire.

The Directorate for Priority Crime Investigation (Hawks) said the man was arrested on Sunday, 2 January, and is expected to appear before the Cape Town Magistrate’s Court.

Hawks spokesperson Brigadier Nomthandazo Mbambo said the man was allegedly caught in possession of suspected stolen property after he gained unauthorised access to the parliamentary precinct in Cape Town.

“He was spotted by members of the Protection and Security Services (PSS) when they noticed the building was on fire,” said Mbambo. Full story here.