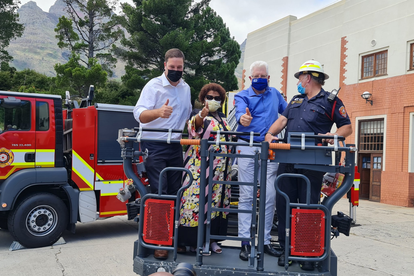 Parliament has officially confirmed the new venue for Ramaphosa’s State of the Nation Address. Image: Parliament

Parliament has officially confirmed the new venue for Ramaphosa’s State of the Nation Address. Image: Parliament

The fire that devastated Parliament has seen officials seeking out alternative venues for the State of the Nation Address. President Cyril Ramaphosa is set to deliver the speech next month.

Parliament officials insisted that the critical speech would still go ahead despite the devastation at its usual venue. In line with this, it seems as if a decision has been made on the matter.

In a statement on the plans for the SONA, Parliament’s Presiding Officers highlighted their commitment to ensuring the speech goes ahead as planned.

“Following a sad and devastating week in which fires that started on Sunday and destroyed Parliament’s buildings, including the National Assembly (NA) and sections of the Old Assembly Chamber, we made a solemn undertaking that, despite the devastation of the disaster, we will not allow a situation where Parliament’s work is derailed or disrupted in any manner.”

In addition to reaffirming their commitment, the Presiding Officers also stressed how crucial Ramaphosa’s address is.

“Parliament must find a suitable venue for the President of the Republic of South Africa, Mr Cyril Ramaphosa, to deliver the 2022 SONA. SONA is the only occasion that brings together the three arms of the state, the legislature, the executive and the judiciary under one roof.”

City of Cape Town comes to the rescue

Furthermore, the statement revealed that the Democratic Alliance led City of Cape Town has gone through great effort to offer up alternatives.

“The Presiding Officers are grateful to the Western Cape Provincial Government and the City of Cape Town for coming forward with offers for the use of their venues for the business of Parliament. They have offered the Cape Town International Convention Centre, the City Council Chambers and the City Hall.”

Interestingly, it seems as if a final decision has been made following a ‘great deal of consideration’ and onsite inspections.

“We are pleased to announce that the 2022 SONA will be held at the Cape Town City Hall.”

“The City Hall was considered a suitable venue technically in terms of infrastructure and its capacity. It is also a befitting place considering its historical significance which is embedded in the minds and hearts of South Africans.”