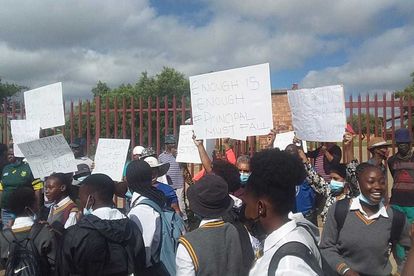 Parents and community members staged a protest and shut down the Lotus Gardens Secondary in Pretoria earlier today after the Gauteng Department of Education failed to deliver mobile classrooms as promised.

The parents alleged that the school in Pretoria West was declared unsafe by the department last week and that they were told six mobile classrooms will be delivered by 30 January however that has not happened.

The parents who blocked the gates said that they have been engaging with the department, teacher unions and district officials for the past three weeks but no action has been taken to address the issue at hand. They also said that no teaching and learning will take place until there is a plan of action by the Gauteng Department of Education.

Neil Naidoo, a parent who has 2 children attending at the school said their main aim was to get a message across that they want their kids back in school, they want them to be educated however, they need to be in a safe environment.

“Six mobile classrooms are not enough for over 1400 pupils. We had no other option but to shut down the school. We were promised this past weekend that the mobile classrooms will be delivered but that has not happened. We then came to an agreement that he said.

“We are fast tracking the process and we expect the mobile classrooms to be delivered within two days. We had asked for the matriculants to be accommodated in a neighbouring school but unfortunately that did not happen,” Mabona said.

Mabona also said they are pleading with parents to not disrupt teaching and learning.