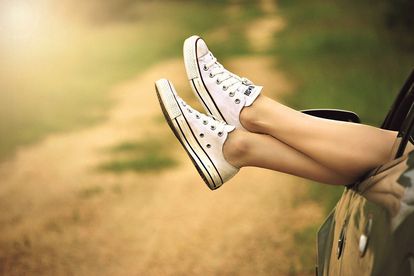 A Pakistani national was found guilty of negligent driving after a video of him surfaced operating a Red Range Rover using his feet.

According to the Road Traffic Management Corporation (RTMC), the man who caused a stir when he steered his red Range Rover with his feet with his body protruding on the window was convicted and sentenced.

The Pakistani national was sentenced to a fine of R8000 or eight months imprisonment. His driving licence was suspended for six months.

MOTORIST SNITCHES ON THE FEET-DRIVING SUSPECT

RTMC reports that Haq caused a sensation in December last year when a video of him, steering a vehicle with his feet while sitting on the window, emerged.

“A concerned motorist who was driving along Moloto Road at the time filmed him as his behaviour was reckless and placed the lives of other road users at risk.”

Driver behaviour including reckless and negligent driving is a major cause of accidents, RTMC reminded motorists.

Consequently, the Road Traffic Management Corporation immediately launched an investigation and traced the motorist to his business in Marble Hall. He was arrested a week later and taken to Kammelsdrift police station where he was charged. His trial was delayed when his mother passed away and he had to travel to Pakistani for the funeral. Further delays were experienced when the Pakistani national was being sought.

The RTMC restated its commitment to deal with all forms of unscrupulous behaviour on the roads and called on members of the public to make the roads safer this festive season.

“Reckless driver behaviour including bribery and corruption can be reported by sending a WhatsApp message on (083) 293-7989 or email ntacu@rtmc.co.za
Driver behaviour, including reckless and negligent driving, is a major cause of fatal crashes on the roads in the country. Those who get involved in such conduct must be called out so that they can face the full consequences for their misbehaviour,” RTMC warned.