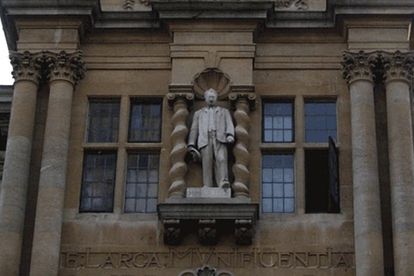 Oriel College at Oxford University has offered a compromise to students campaigning for the removal of the Cecil Rhodes statue. The college suggested erecting a sign next to the statue disassociating itself with the views of the 19th century colonialist.

The sign was suggested as an alternative to tearing down the statue. Oriel was warned earlier this week that if it removed the statue it would be “destroying history”.

The campaign, Rhodes Must Fall Oxford, stated that the college violated the university’s declared aim of “fostering an inclusive culture which promotes equality, values diversity and maintains a working, learning and social environment in which the rights and dignity of its staff and students are respected”.

“RMFO is not just a campaign about a statue. We are engaging with the issue of race in Oxford from multiple angles – from the curriculum to improving BME representation and welfare amongst staff and students. We are not here to obliterate the statue in its entirety. We are highlighting that by (quite literally) elevating it on one of our buildings, we are effacing the histories of the many people who suffered tremendously under Rhodes and his legacy. Indeed, we are not a destructive movement. We are, at our core, constructive; we are looking to create better, more appropriate ways of engaging with our history.”

My recent interview with Al Jazeera for the @RMF_Oxford collective on Rhodes statue in Oxford | https://t.co/Uq8zjvjvcm #RhodesIsFalling

The college has agreed to remove a plaque featuring Rhodes and agreed to ‘consult’ on removing the statue which stands at its entrance.

The sign will be considered as part of a formal consultation on what the college should do about the statue. It is being considered a ‘third way’ of dealing with the statue.

The college has put up a notice in a window near the statue which says: “This building, completed in 1911, was funded by a bequest from Cecil Rhodes. The statue of Rhodes erected at the time of construction and is part of a Grade II* listed building.

“Many of Cecil Rhodes’ actions and public statements are incompatible with the values of the College today. In acknowledging the historical fact of Rhodes’ bequest, the College does not in any way condone or glorify his views or actions.”

What Oxford alumni are saying

Oriel College alumni have spoken out about keeping the statue in place.

Tory MP Sir Alan Haselhurst, said: “We are not proud of absolutely everything that happened in our past, but we cannot erase it all.”

Sir Alan said: “I don’t think you can destroy history. Apologising for the past is one thing, but destroying symbols of the past is quite another.”

Cambridge professor Mary Beard wrote the following in a blog: “I really don’t think you can have your cake and eat it – you can’t whitewash Rhodes out of history, but go on using his cash.”

Tory MP Jacob Rees-Mogg said: “George Washington kept slaves and Elizabeth I had Catholics tortured. Rhodes was a man of his time. This does not justify past behaviour – but it does contextualise.”