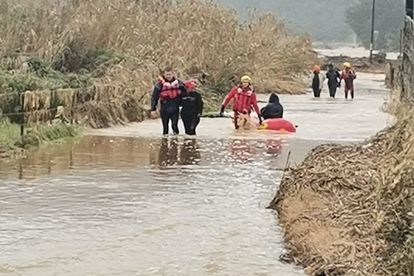 The southern parts of the Western Cape have been battered by the winter storm since it made landfall on Wednesday, 5 May. Struisbaai, Cape Agulhas and the surrounding areas were particularly hard hit by floods and two people died in Bonnievale after a bakkie overturned.

The Overberg District Municipality said the rain is expected to continue until Friday and emergency services in the area are conducting rescue and relief missions in the area.

Western Cape Premier Alan Winde said two people are missing and thirty farmworkers are currently being evacuated in Riversonderend (RSE), in an update shortly before 17:00 on Thursday.

“The Overberg, specifically Bredasdorp, Struisbaai and the surrounding areas continue to be hardest hit by the winter storm… with many areas still flooded,” said Winde.

“There have been two fatalities in the Bonnievale area that occurred on Wednesday.”

The Premier said search and rescue efforts are continuing for two missing persons in Stormsvlei and Riviersonderend, respectively.  Meanwhile, thirty farmworkers are being evacuated from a farm in the RSE area.

The rising levels of the Breede river has cut off the Malgas community, which is at risk of being flooded. The roads around the Southern Cape town are impassable and people are urged not to attempt to leave the area. Overberg Disaster Management have put contingency plans in place.

At 16:22, the Overberg Municipality said its current crises included the evacuation of the RSE farmworkers, the safety of first responders and warning the Malgas community about possible flooding.

The evacuation of a diabetic patient, also in the RSE area, was underway along with at least six other rescue missions.

“The estimated number of affected persons for the region is 600+,” said the municipality.

The Minister of Local Government, Environmental Affairs and Development Planning, Anton Bredell, said the NSRI, EMS, SANAF and SAPS were deployed in the affected areas alongside the district’s municipal fire and rescue services.

“In addition, the South African Airforce has put an Oryx helicopter on standby to assist with search and rescue operations when conditions allow,” said Bredell.

Bredell said bad weather is predicted to continue until Saturday and a warning has been issued for heavy rain in Oudsthoorn.

“Emergency services are working non-stop to assist people who have been affected by the storm,” said Bredell.

Rivers are swelling and flooding their banks in places and this is expected to continued over the next day or two. A video clip, shared by watchdog group Bosbeer, shows how much the water level has risen in the Overberg – rushing water washes away what appears to be scaffolding under a bridge between Stanford and Hermanus.