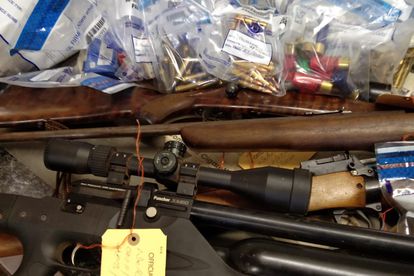 Over 1000 suspects were arrested during the ongoing operation ‘O Kae Molao’ in Gauteng this past weekend.

Police spokesperson Colonel Dimakatso Sello said this past weekend various law enforcement agencies were out in numbers and more boots on the ground as over 1000 suspects were arrested.

Sello said the arrests for different crimes such as possession of drugs, possession of unlicensed firearms, murder, assault GBH including undocumented persons which will be processed by Department of Home Affairs.

MEC Faith Mazibuko and Major General Mbele led the operation conducted in Tshwane District where 280 suspects were arrested and 110 of those were for serious crimes against women and children.

“Eight unlicensed firearms and ammunition were seized and several illegal shebeens were closed down.”

West Rand police together with other law enforcement agencies arrested 168 suspects during a joint and intensified crime prevention operations which included suspect tracing by the Detectives.

The suspects were arrested for offences such as murder, robbery, possession of unlicensed firearms, assault GBH, malicious damage to property and dealing in drugs.

Police in Johannesburg District arrested 396 suspects including 129 suspects who were arrested during a suspect tracing operation.

Illegal mining equipment was seized and 46 undocumented persons were taken in to be processed by the Department of Home Affairs.

Some of the suspects were issued with fines while the others are expected to appear before different Magistrates’ Courts starting from Monday, 7 March 2022.