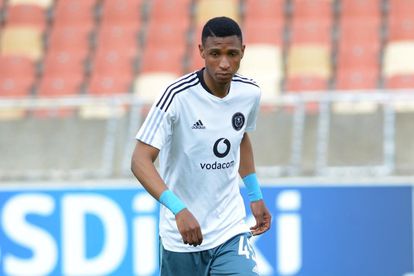 Pule suffered a Grade III tear of the quad in October 2021 while on national team duty with Bafana Bafana for the FIFA World Cup Qualifier against Ethiopia.

At the time, the Pirates medical team had estimated Pule to be out for at least 12 weeks, meaning he was expected to return around December.

However, this wasn’t the case as the left-footer went on to miss the whole of last season, and only be declared ready to join his teammates during pre-season.

Now, Pule said while he is back from the injury, the only thing that is lacking in his game is match fitness hence he missed Pirates’ opening match of the season against Swallows FC last weekend.

He admitted that it has been difficult watching his Pirates teammates from afar but he’s working hard on getting back into the team.

WHY VINCENT PULE HASN’T BEEN PLAYING FOR ORLANDO PIRATES

“I’m back but the only problem is that match fitness [is lacking]. But I’m back and I’m going to make sure that I add value to the club again,” said Pule to SABC Sport.

“Being out for the longest time, seeing your mates cheering or crying after games feels heavy, and sometimes it’s painful but you just accept that you’re here and you must make sure you take the necessary steps to get over it.”

FRESH START FOR EVERYONE AT ORLANDO PIRATES – VINCENT PULE

Furthermore, Pule weighed on having to work with new coach Jose Riveiro, saying there is a lot of positive energy with the Pirates camp since the Spaniard’s arrival.

READ | KAIZER CHIEFS VS MARITZBURG UNITED: HOW TO WATCH THE MATCH ON TV

He feels every Pirates player in that squad is eager to raise their hands for Riveiro to select them in his matchday squads.

“It’s a fresh start for everyone, there’s a lot of positive energy because everyone wants to push and impress the coach, and I think that’s the good thing when a team gets a new coach,” he continued.

READ | SUNDOWNS LOAN OUT ANOTHER DEFENDER, THIS TIME TO RICHARDS BAY FC