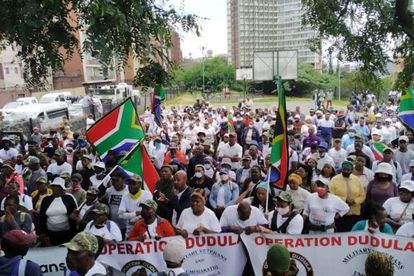 Around 150 members of Operation Dudula marched to various factories in Cape Town earlier this week. The members reportedly told six factories in Witsand that they have seven days to remove illegal immigrants from their businesses.

The Operation Dudula members handed over a memorandum to the factories. According to the memorandum, the group will bring forth relevant law enforcement or the Home Affairs Department to enforce the country’s immigration policy if the alleged illegal immigrants are not removed from the factories.

“If an illegal foreigner is found on any premises where a business is conducted, it shall be presumed that such foreigner was employed by the person who has control over such premises, unless prima facie evidence to the contrary is adduced,”

Nkululeko Watermayer of the movement stated that South Africans are unemployed but factories are employing foreign nationals.

According to IOL, the Managing Director of PC Revalidation Dale Lewis said Operation Dudula members had previously visited the factory. Lewis explained that there were about 10 members who initially visited and delivered a letter regarding the employment of illegal immigrants.

When the group returned, Lewis said there were about 150 people. Not only did they give the production manager another memorandum but they also handed over around 50 CVs.

“The Dudula leader group is horribly misinformed and should be embarrassed by their selection of our business for their protest. We do not employ illegal immigrants. Of the approximately 42 staff we have, six foreign nationals we have all have papers allowing them legal employment in South Africa. We only employ people living in the greater Atlantis, Mamre/Witsand area and the business is 80% black women-owned,”

Lewis further stated that the business has the right to employ anyone who is legally allowed to be employed in Mzansi. He added that they would seek relief from the courts if the group attempts to intimidate his staff again.