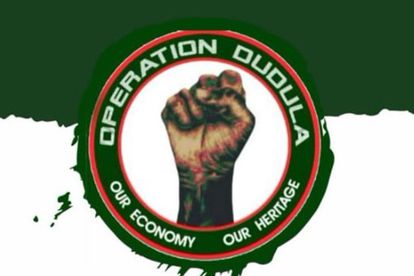 Members of the Operation Dudula movement marched to the Krugersdorp Police Station with a few demands.

Dudula members want the district commissioner to step down

Dudula members called the police station, based in Gauteng’s West Rand, to be placed under administration and for Fred Kekana, the police district commissioner in the West Rand, to step down.

Operation Dudula’s Dan Radebe said that Kekana should step down immediately as he did not address crime in the area for years, reports SABC News.

Radebe said they would continue to go back to the police station until Kekana steps down.

“If he can prove that to us, we will take our fight to national. At this moment he is going to take the brunt of the people, he is going to feel it. We are not going to rest. If it means we are coming back next month, we will until he steps down, rapes have been happening for years, that’s why we are calling for this police station to be placed under administration up until they get it right,”

The march follows news of eight women who were gang raped at a mine dump in Krugersdorp last month. The accused are allegedly undocumented foreign nationals who were working as illegal miners.

Since then, 14 miners have been charged for the rapes – the youngest of the group is just 15 years old.

Previously, it was reported that Operation Dudula and Nhlanhla “Lux” Dlamini’s Soweto Parliament held a media briefing on Monday, 25 July, to clarify recent differences in opinion between the two organisations “to mitigate further damage.”

The announcement came after two meetings between the organisations that ended in a stalemate. That being said, after the second meeting, the organisations agreed to work together on certain issues under different brands. Operation Dudula has been criticised for being xenophobic by large swathes of society despite repeatedly distancing itself from the label. As previously reported, in April, President Cyril Ramaphosa condemned the group and referred to it as “a vigilante type” organisation. Read the full story here.