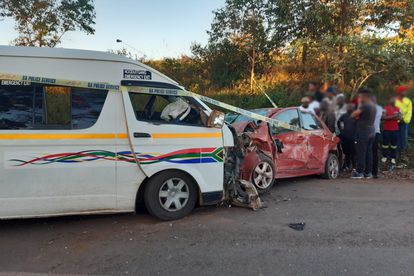 A man was killed in a collision in Swayimane. Photo: ER24

A man was killed in a collision in Swayimane. Photo: ER24

A man was killed in a head-on collision between a taxi and a car in Swayimane, KwaZulu-Natal (KZN) on Tuesday afternoon, 3 May. More than a dozen other people sustained injuries in the crash.

TAXI AND CAR COLLIDE IN KZN

Emergency service, ER24, said the accident took place before 17:20 on a district road in Swayimane, Wartburg.

When the emergency service arrived at the scene, the taxi and car were on the same roadside and several people were found sitting and lying near the vehicles.

“Medics assessed the patients and found that a man from the light motor vehicle had sustained fatal injuries. Unfortunately, nothing could be done for him, and he was declared dead,” said ER24.

The remaining patients – 14 of them – were assessed at the scene and their injuries ranged from minor to moderate.

The injured patients were treated on the ground before being transported to nearby hospitals for further medical treatment.

The police are investigating the incident.

In an unrelated incident, three people were injured when a taxi and a truck carrying a container collided on the N3 southbound near Camperdown, KZN.