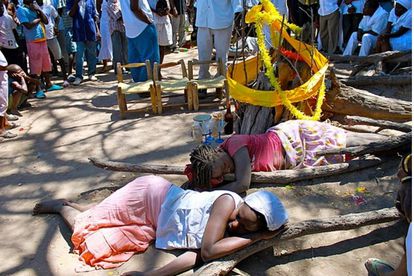 Typical voodoo ceremony in Haiti. The Voodoo religion originated in Benin where Voodoo National Day is celebrated annually on 10 January.

Typical voodoo ceremony in Haiti. The Voodoo religion originated in Benin where Voodoo National Day is celebrated annually on 10 January.

Here’s a look at what happened on this day, 16 April, throughout history. We remember the news, events, and people that influenced the course of history forever.

2014 | The South Korean MV Sewol ferry overturned and sank near Jindo Island, killing 304 passengers and crew and causing widespread criticism of the South Korean government, the media, and the shipping authorities.

2013 | A 7.8-magnitude earthquake struck Sistan and Baluchestan Province, Iran, at least 35 people were killed and 117 others were injured.

2012 | The trial of Anders Behring Breivik, the perpetrator of the 2011 Norwegian attack, began in Oslo, Norway.

2013 | The 2013 Baga massacre started on this day when Boko Haram militants engaged government soldiers in Baga.

ALSO READ: What happened on 15 April?

1975 | On this day, Newcastle United’s Malcolm Macdonald scored all of England’s goals in a 5-0 win over Cyprus in a Euros qualifier at Wembley Stadium.

The Voodoo religion originated in Benin where Voodoo National Day is celebrated annually on 10 January.