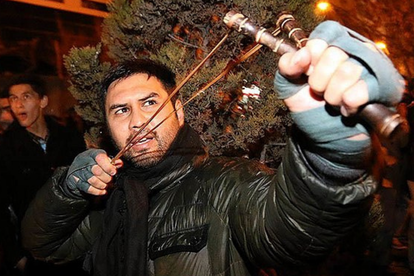 A man Protesting in Mashhad against the execution of Nimr al-Nimr in front of the Saudi consulate. Image: Wikimedia Commons

A man Protesting in Mashhad against the execution of Nimr al-Nimr in front of the Saudi consulate. Image: Wikimedia Commons

Here’s a look at what happened on this day, 03 January, throughout history. We remember the news, events, and people that influenced the course of history forever.

2016 | Iran announced to end its diplomatic relations with Saudi Arabia due to the fallout caused by the execution of Nimr al-Nimr on this day.

2015 | The entire town of Baga in northeast Nigeria was razed by Boko Haram militants on this day, starting the Baga massacre and 2 000 people killed.

2004 | The deadliest aviation accident in Egyptian history was reported when Flash Airlines Flight 604 crashed into the Red Sea causing 148 deaths.

ALSO READ: What happened on 02 January?

1974 | After a dispute between Chelsea manager Dave Sexton and players Peter Osgood and Alan Hudson the two Chelsea stars were suspended and listed for transfer immediately on this day, Hudson moving to Stoke City and Osgood to Southampton.

Morocco has 7 wine regions and produces 40 million bottles of wine annually but it is hard to find alcohol.  However, drinking alcohol is against the religion of Islam. Although the country produces wine and beer, alcohol is not widely available except in a few licensed hotels and restaurants that cater to tourists.