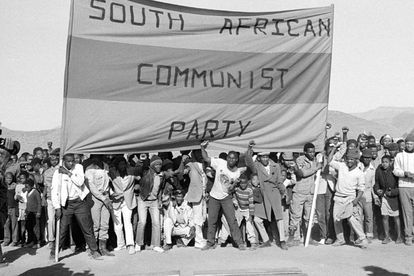 In 1990, The South Africa Communist Party began its first legal conference on this day. Image: BusinessLIVE

In 1990, The South Africa Communist Party began its first legal conference on this day. Image: BusinessLIVE

Here’s a look at what happened on this day, 29 July, throughout history. We remember the news, events, and people that influenced the course of history forever.

1981 | Anti-apartheid protesters against the Springbok rugby tour were confronted by baton-wielding police to stop them from marching to the South African Embassy in New Zealand.

1990 | The South Africa Communist Party began its first legal conference on this day.

2019 | At least 57 people were killed when prison riots between rival gangs broke out in Brazil.

2013 | Twenty-five people were injured when two passenger trains collided in the Swiss municipality of Granges-près-Marnand near Lausanne.

1996 | The U.S. federal court struck down the child protection portion of the Communications Decency Act as too broad.

ALSO READ: What happened on 28 July?

1983 | On this day, “National Lampoon’s Vacation” was released in the United States.

Nouadhibou Bay in Mauritania is home to one of the largest ‘ship graveyards’ in the world. There are over 300 ships that are thrown into the bay once they are no longer needed.