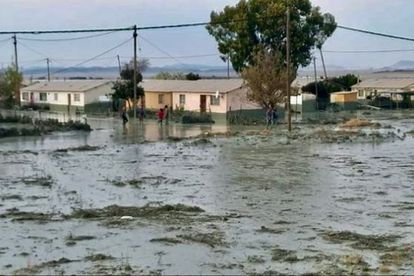 The flooding has caused damage to infrastructure in the area including that of Eskom. PHOTO: Twitter/@NationalCoGTA

The flooding has caused damage to infrastructure in the area including that of Eskom. PHOTO: Twitter/@NationalCoGTA

According to the Free State provincial government, the dam burst happened at a nearby abandoned local mine. It is presumed it was caused by aged and deteriorated infrastructure.

This burst has however damaged the homes and precious items of residents in the nearby Charlesville, said Free State Premier spokesperson Palesa Chubisi.

She said that furniture, vehicles and other important belongings of the community are also damaged.

The province’s Department of Cooperative Governance and Traditional Affairs and Human Settlement will be visiting the site on Sunday.

“MEC Mxolisi Dukwana is working with Premier Sisi Ntombela to do an in loco inspection of the affected area and will thus brief the national Minister of Cooperative Governance and Traditional Affairs, Nkosazana Dlamini-Zuma about the situation. This is for purposes of jointly coordinating disaster management.”

ANY LATEST DEVELOPMENTS TO BE COMMUNICATED

Chubisi said the media and the community will be regularly updated on the latest developments.

“Once again, the MEC joins the Premier in expressing our deepest solidarity with the community of Jagersfontein. [They] urge all and sundry to extend all forms of moral and material support to the victims of the disaster as government works out the logistics of immediate intervention on its own part.”

The Department of Mineral Resources and Energy is also visiting the site.

Minister Gwede Mantashe is expected to brief the media following the incident this afternoon.

The flooding has also left Eskom’s infrastructure damaged, with residents left with no power.

The power utility says they cannot determine when power will be restored or the extent of the damages, spokesperson Sikonathi Mantshantsha said.

“Since Eskom’s telecommunication system is also affected by the flood, the impact on the surrounding networks is still unclear. Any meaningful updates will be promptly communicated,” said Mantshantsha.