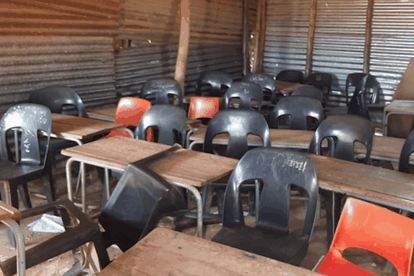 A school in Mpumalanga has highlighted some of the dangers educational institutions face when bringing their students back to school on Monday. The Mokibe Primary School in Mpumalanga went viral for all the wrong reasons this weekend when footage of its collapsed classrooms were shared rapidly online.

The facility has caved-in roofs, broken doors and equipment, and fails a set of basic hygiene requirements. Up until 11th hour intervention on Sunday, Grade 7 learners were expected back at these facilities today. However, the Mpumalanga Education Department decided to intervene.

Pupils will now be transferred to the Mogalitwa Primary in Emalahleni. A total of 36 students will go and learn at an entirely different school, due to the dilapidated nature of their own. As you can see from the video clip, the idea of creating a safe and healthy learning environment of Mokibe was out of the question:

Look at the pathetic conditions at this school. Video from FB. @DBE_SA @GovernmentZA @CyrilRamaphosa pic.twitter.com/AP5LB6tzlo

The Mpumalanga Education Department has been forced to explain why one of their schools has been left to crumble and moved to shift the blame elsewhere. They claim that a technical snag involving private developers is to blame for the lack of infrastructure and vowed to speed up the rebuilding process:

“The department has long planned to improve conditions at Mokibe. This resulted in a mining company committing to building a fully fleshed school, in partnership with the province. But the construction process was delayed because of a dispute over a privately-owned site which was earmarked for the school.”

“Had it not been for the dispute, Mokibe would have been long improved. Be that as it may, the department is looking to accelerate the development of this school by working alongside the mining company initially involved.”

Statement from the Mpumalanga Education Department