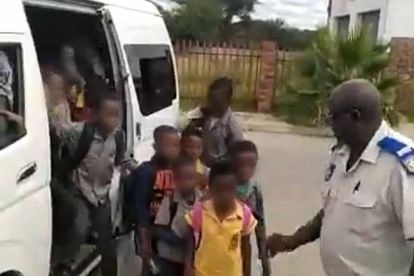 It defies belief, really. Traffic officials in Bela-Bela, Limpopo were left stunned by the sight of a taxi packed full of young schoolchildren. Once they pulled the vehicle over – crammed almost four times to its capacity – officials were able to get the kids out of the car towards safety – all 58 of them.

A video clip has surfaced online, depicting the moment the young learners were set free. The traffic authorities are audibly stunned by what they’ve seen, and the news reached the parents on Monday. Many have been left apoplectic, and were seemingly unaware of the death-trap their young ones had been travelling in.

The Limpopo traffic department’s Joel Seabi confirmed the incident. He said officials will visit the affected schools to further deal with the matter. We’re not sharing the footage which was circulated on social media, as it fails to protect the childrens’ identities. However, these screenshots aptly summarise their horrendous ordeal:

After the issue was highlighted by anti-crime advocate Yusuf Abramjee, Gauteng Education MEC Panyaza Lesufi took the mantle to investigate affairs across the border. The Tweet has since lead to a number of witnesses sharing what they know about the dangerous taxi ride in Bela-Bela:

I am looking for details Yusuf, kindly assist us

Meanwhile, the Road Traffic Management Corporation have Tweeted their grievances with the video:

“Parents should never allow their children to be transported in an overloaded vehicle. The safety of a child is the primaryresponsibility of every parents. The drivers of scholar transport should have a valid driver’s licence, professional drivers permit. Children [should not travel] in vehicles that aren’t safe.”

RTMC statement on the Bela-Bela incident