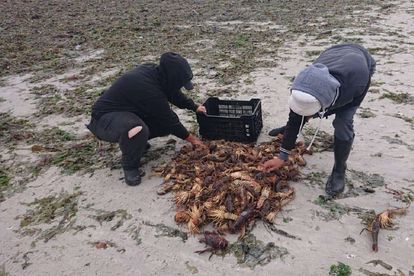 The Environmental Department has issued a warning for people living along a 60km stretch of the West Coast, after a ‘red tide’ turned the seawater into a different colour. The marine event isn’t uncommon, but it does come with hazardous consequences – and St Helena Bay & Elands Bay remain the worst affected areas.

Red tide on the West Coast – what is going on?

Red tide is a common name for algal blooms, which are large concentrations of aquatic microorganisms, such as protozoans and unicellular algae. The upwelling of nutrients from the seafloor, often following massive storms, provides for the algae and triggers ‘bloom events’. This turns the surface colour of the sea ‘red to brown’.

The Department of Agriculture, Forestry, and Fisheries (DAFF) has cautioned the public, warning that some of the algal species contain toxins that are poisonous to humans. Poisoning may either take place through the consumption of contaminated seafood.

The red tide has resulted in several marine species washing up on the beach. They include; rock lobsters, octopus, white mussels, and some fish species – including crayfish, which have been exiting the sea in their droves. The Environmental Department of South Africa has now issued a Yellow Alert for the West Coast, to cover the next few days.

“The Department has immediately, in terms of its West Coast Rock Lobster Contingency Plan issued a Situation Yellow alert and placed all government role-players on standby. Weather conditions are not favorable at the moment as a Northwesterly (NW) wind is currently blowing and keeping the algal bloom concentrated in the bay.”

“These blooms of phytoplankton presently extend 50-60 kilometres in the vicinity of Elands Bay, Lambert’s Bay, and Doring Bay. Periods of calm often leads to their decay – and the subsequent development of low oxygen conditions which cause marine mortalities. With the prediction of light westerly winds over the next few days, the risk of further mortalities is high.”

As is often the case in summer and late summer, there has been a build-up of large Red Tides in the greater St. Helena Bay region over the past few weeks. These blooms of phytoplankton presently extend 50-60 kilometres in the vicinity of Elands Bay, Lambert’s Bay and Doring Bay.