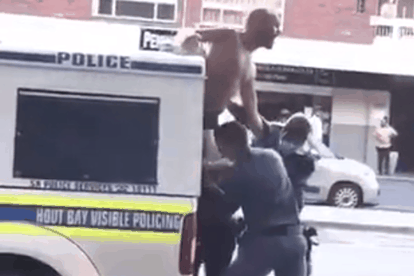 The latest viral video doing the rounds on social media is likely to split opinion. A Hout Bay resident was bundled into the back of a police van this week, after a dispute over the wearing of masks – and, in fact, any clothes at all – boiled over. The male claimed his rights were being infringed, screaming ‘white lives matter’ during the altercation.

From what we can see in the footage shared online, the suspect is donning nothing but his underwear. Standing in the middle of the street, three officers address the issue, and try to move the troublesome local into the back of their van. However, this only fans the flames of confrontation, and the civilian tries to resist arrest.

He’s eventually overpowered, and forced into the vehicle. But he doesn’t go down without a fight. The unidentified man claims he’s the victim of ‘abuse’ at the hands of the arresting officers, and desperately calls out ‘white lives matter’ to the watching public. However, many were left unimpressed by his antics.

While being detained, one onlooker reminds him that he’s ‘not wearing a mask’, despite his protestations that ‘no crime has been committed’. If he was looking for sympathy, he’ll have to look further than the streets of Hout Bay…

In Hout Bay you get arrested for wearing undies ?? pic.twitter.com/0UKYNmFSEE

Is it illegal to not wear a mask in public? Yes…

On Monday 28 December, Cyril Ramaphosa stated that mask-wearing in public would become ‘compulsory’. The law was ratified just 24 hours later, and Police Minister Bheki Cele has already been flaunting the police’s new powers. According to the president, offenders to this new guideline could be slapped with a six-month prison sentence: