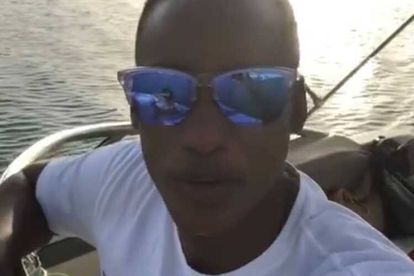 Well, we can’t imagine how this could *possibly* come back to bite Duduzane Zuma if he runs for president in the next few years. The son of Jacob often cuts a controversial figure – and staunch critics will not be too impressed with the videos that were shared online this week, showing him living the high life in Dubai.

Although the videos aren’t dated, it’s understood that they were taken recently. Duduzane Zuma – who once famously claimed he wasn’t born with a silver spoon in his mouth – can first be seen taking a speedboat out for a spin, singing along to Madonna’s La Isla Bonita. In the second video, he sends a birthday shout-out to his friend while on a yacht.

A crowd of beautiful women all take turns wishing his friend Max a ‘happy birthday’, including one South African citizen. The videos don’t last long, but they certainly tell us all we need to know about Zuma Jnr’s lavish lifetstyle in the UAE.

While the father of RET argues for an executive democracy, the future leader of RET was, well, doing what he does best. Sawtafrikha kodwa pic.twitter.com/nUYstqqt77

Duduzane Zuma lives the high-life, with Guptas nearby

Fair enough, everyone’s entitled to spend their free time how they want – but Duduzane Zuma is likely doing this on the taxpayers’ bill. The Daily Maverick claims that DZ is still funding his playboy antics with ‘state funds’. On top of that, however, there are even more morally questionable factors.

Duduzane is pretty much at the heart of the entire state capture network. The 37-year-old worked closely with the Gupta brothers, and even defended them during his appearance at the Zondo Commission. The fact he is now in the same city as the Indian billionaires, potentially spending our money on his parties, is a slap in the face for many South Africans.