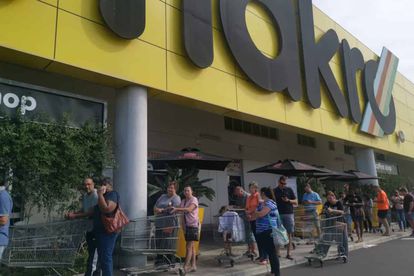 Cyril Ramaphosa has called for calmness and solidarity ahead of a three-week lockdown period to fight COVID-19. He’ll probably want to steer clear of some major retail outlets, then. Places like Makro, Checkers and Pick n Pay saw shoppers stockpiling goods as they flocked to crowded aisles, breaking “social distancing” guidelines.

As we saw last week, a number of supermarkets were raided for their most coveted goods. The brainiacs currently stuffing their trollies to the brim – despite knowing full-well that stores will remain open during lockdown – have decided that toilet paper is their number one item of choice.

Hand sanitizers, perishable goods and boxes of pasta have been flying off the shelves – and Makro has found itself at the centre of another “panic-buying” storm. Scenes from their respective chains in Ekurhuleni and Crown Mines (both in Gauteng) suggest that people are ignoring government advice to avoid stockpiling.

Snaking queues again at Makro in Ekurhuleni as the rush to get supplies before the shutdown continues. @ReporterStar pic.twitter.com/zCfdlf2aUA

Stockpiling across the country

Long queues and large crowds have been spotted at several chains in South Africa. Checkers and Pick n Pay have also been affected, with some local cash and carry stores feeling the strain too.

It’s downright selfish, whichever way you want to frame it. The fact that this occurs during business hours – when the rest of us are trying to work under these extreme circumstances – serves as an additional “kick in the baskets” for South Africans who are diligently following the directives issued by Ramaphosa and his team.

Chaos at the local the local checkers, with the queue s along through the store. Pre-lockdown shopping is a thing. And all I needed was milk and apples (so boring). #coronazuidafrika #coronadiaries #LockdownSA pic.twitter.com/bDOaOzlOWA

PLEASE fellow South Africans can we stop a) panic buying AND b) ignoring the request to maintain physical distancing and gathering in low numbers, etc.

This is at Pick N Pay in Norwood in Johannesburg.

It does not help us to contain the spread of COVID-19. Let’s all comply. pic.twitter.com/ODnyxu1ITp

#Covid19SA At the Cash and Carry in Crown Mines as customers flock here following announcement by president on #lockDownSouthAfrica @BongaDlulane pic.twitter.com/mHc2U2ddcp