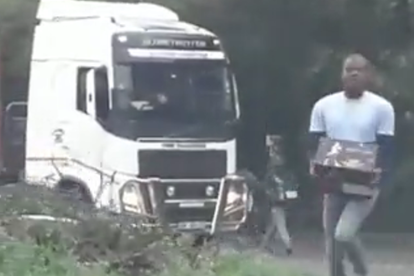 The festive season has come early for opportunists in Durban, after they promptly descended upon a liquor truck that lost its load on Friday. The vehicle was emptied out, and the looters in question have stocked up for Christmas.

This incident took place on Edwin Swales Drive, just outside of Durban’s bustling city centre. Traffic has been slow-going for most of the day, due to terrible weather conditions and an organised ‘truck blockade’ on the N3.

Gavin Kelly, CEO of the Road Freight Association (RFA), was less than impressed with what he witnessed this morning. He has condemned the ‘violence and looting’ reported in various incidents across the city.

“The vital N3 route between the Port of Durban and the interior has been blocked, again. Violence and looting has occurred according to some reports – whilst individuals have taken the law into their own hands to pull drivers from trucks to check their personal documents.”

Several videos have since emerged online, capturing the chaos on both sides of the carriageway. The festive free-for-all saw multiple drivers leave their cars, dart across the highway, and return with mountains of liquor:

“An SA Breweries truck lost its load and the community looted the truck. I have given feedback to the Durban Chamber of Commerce. The unfortunate part, and it appears to be rife, is that whenever a truck loses its load these days, whether its food or drink, localised looting takes place. It is not an orchestrated incident.”