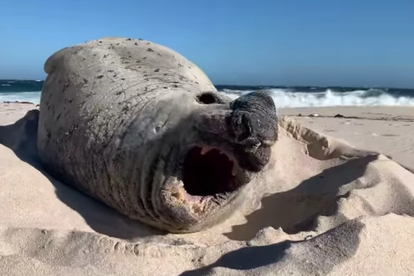 What a truly wonderful sight this is: An elephant seal has made himself right at home on the shores of Cape Point this week, and it’s expected that the hefty creature will remain on the sands for another ‘three to four weeks’.

Elephant seals are seldom spotted in South Africa, with only a handful of sightings logged each year. However, the footage captured by Anton Crone is absolutely breath-taking: His up-close and personal encounter sees the big fella yawn and clamp his jaws shut, while in the middle of moulting – a process which sees the animals shed a layer of their skin.

“This southern elephant seal has just arrived on Dias Beach in Cape Point. He’s likely landed here for his annual moult – These seals find a beach somewhere between Antarctica and South Africa on which to moult. He will likely stay for three or four weeks, as he sheds old skin and will not eat over this time, surviving on resources of his fat.”

What you need to know about the elephant seal

The curious visitor is likely to remain on the sands until mid-April, before undertaking an arduous journey back towards the world’s coldest continent. The elephant seal is indeed a special breed, and these guys have a very unique lifestyle.